Showing posts from February, 2018
Show all

Very excited to announce that I'll be appearing Saturday, March 3rd at the Norfolk Public Library (NPL) Author Fair!  It's their first-ever time putting on this event, so I'm thrilled to be a part of its initial appearance. There will be as many as 50 local authors in and around the Norfolk/Hampton Roads area, with discussion panels, readings and other fun events all day long (and also on Sunday).  Additionally, there'll be some awesome giveaways n' raffles that might just include a signed copy of the first volume of Election 2064. Here's the event website for more information. And here's the list of authors appearing.  Hope to see you there!
1 comment
Read more 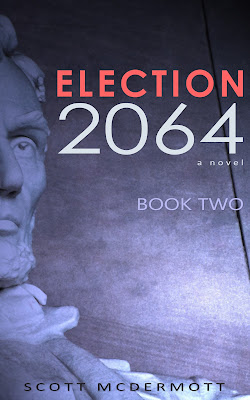 So excited to finally share this! Election 2064: Book Two The saga continues, June 2018 "America, as she so often finds herself, is standing at a crossroads. Once the election season begins in earnest, a battle rages for her conscience among those vying to be the stewards of her future. An ambitious senator channels a mysterious inner voice to embody the resentment of his followers and rise to increasing prominence. A gifted artist reunites with a figure from his past to discover the Second Civil War’s most explosive secret. A wealthy technologist gains national attention through his genius, but must decide who and what he stands for. A dedicated policy analyst reluctantly embraces the spotlight to shepherd the creation of a new national charter. An unconventional governor and her campaign-staff daughters strive to pull their traditionalist supporters into a modern age. And a judicious new president struggles to deliver on the dreams of his predecessor, though wh
Post a Comment
Read more
More posts